In this video, I take you on a trip to the rock sanctuary Proviralkyata, which is located next to the monastery “St. George the Victorious”, near the village of Lilyach, Kyustendil.

Recently I have visited by chance the site of Rumen Zinoviev http://skalnispomeni.com and there I saw that in the area of Kyustendil there are many anthropomorphic rocks, which according to the author of the site, and the photos I saw, are most likely the result of human activity. Unfortunately, for none of them there are instructions or geographical coordinates, so finding any of these rocks seemed to be a matter of luck.

I decide to start my search from the village of Lilyach and the rock sanctuary Proviralkyata (Stone Passage Trial), which is quite clearly marked on Google Maps, so at least I know where I am going.

To reach the Stone Sanctuary you need to exit the village, drive on a dirt road for about 1.5 km, and park near St. George the Victorious Church. The road forks in several places, but you can’t go wrong, because there are signs everywhere indicating the direction to the monastery.

The road passes along the dam wall. After that, you will enter a wooded area and now, in February it is muddy, in places mixed with snow. Fortunately, I have brand new winter tires, and I rely on the special off-road mode, in case I get stuck somewhere completely.

The church “St. George the Victorious” was built as a village temple in 1925, on the site of an old consecration site, which was also dedicated to St. George.

Unfortunately, the church is not in very good condition, and despite the repair of the roof, the plaster on the ceiling and the facade continue to crumble.

The rock sanctuary, called “Proviralkyata” by the locals, is a huge megalithic complex, including several natural rock arches, sacrificial pits, and gutters, as well as a solar circuit, reworked in ancient times.

At the top of this stone block, there are several stone troughs, which probably served for the performance of ritual actions.

There is a belief that if a childless woman crawls along the gap between the rock boulders, her  desire to have a child will come true. This may explain the large number of “gifts” on the branches of the surrounding trees. Elastics for hair, rags, masks for COVID-19, obviously this is the most current at the moment.

There are similar “tree decorations” in the area of ​​Krastova Gora, in the Rhodopes. Paganism in Bulgaria has never disappeared, but has existed in parallel with Christianity and in my opinion has become quite deeply intertwined with some rituals and rites that people already perceive as Christian, while they are purely pagan.

In the vicinity there are two more large stone blocks, with a fairly regular shape.

There are some carvings in the rock, which the more I observe, the more they look like “DSD Gosho” (initials +  a common Bulgarian name) or something like that. Unfortunately, vandalizing ancient monuments is not uncommon here or anywhere else around the world. Apparently, everyone is compelled somehow to leave his mark in the world for the future generations. Some do it in a constructive way, others – in this way.

At the beginning of the stone passage there is a small chapel, whose improvised altar is not canonical on the east side, but is oriented to the northwest. There is a place for lighting candles, a donation plate, icons. Judging by the sums left, people either rely more on the COVID masks, tied to the tree branches for benevolence from above or someone passes by regularly to collect larger sums, so that they do not disappear.

The frames of some of the icons are quite … strange – such as a blue box of candies.

The makeshift chandelier is also quite impressive.

The shape and positioning of one of the stone blocks, in my opinion, definitely show processing by human hands. I’m going through the stone passage. It was described somewhere that it is 30 cm high and can be only crawled. I pass it by squatting, I have a backpack on my back and I still think that when I squat I don’t reduce to 30 centimeters, but I may be wrong.

The tunnel between the stone blocks continues. The mixture of paganism and Christianity is clear here as you can observe an icon attached to the stone.

Unfortunately, so far the area of ​​the sanctuary has not been studied in detail, only a field study has been done. Observations at other similar sites reveal that similar rock arches are cult facilities dedicated to the rising sun, whose rays penetrate the arch and fall on the platform, where the worshiper comes out during the ritual. According to Professor Vasil Markov, most of these ancient holy places are rock temples of the Sun, identified with the male deity in ancient Thrace. The penetration of the sun’s rays into the cave-like tunnels can be interpreted as a symbol of the womb of the Great Goddess – mother, identified with the rock and the mountain, which in the scientific literature is considered a form of sacred marriage.

In most sanctuaries this so-called Sacred marriage coincided with the coming of the ancient New Year, when the revival of nature for a new life through a new conception began, and this was to ensure fertility and abundance throughout the year.

Probably the real stone passage is a bit further down the path, because I reach a really low stone arch where I can imagine that someone has to lie on his abdomen to get through the lowest part.

According to data collected by the local population of Lilach village, many brides “got children” precisely through the miraculous power of the stone passage.

Sacred continuity is clearly observed at the rock sanctuary in Lilach. It is possible that pagan cults were displaced by the adoption of Christianity as the official religion in the Roman Empire in the early IV century. The presence of rock niches suggests the existence of a monastery in the early Christian era (IV – VI century), and maybe also in the Middle Ages, which is probably the reason why the whole area is called “Monastery”.

In such places, pagan cult practices and Christianity intertwine. For example, on the stone block above the stone passage, many crosses were carved, and the area around them was smoked by lighting candles.

Looking closely at one of the boulders, it seems as if the lower and upper rock are two separate stone blocks, cut level extremely precisely with some ultra-technological tool and placed one on top of the other. Here, of course, this illusion is shattered by the obvious connection between the two blocs. But a fan of the theories of ancient aliens can certainly find a lot of food for thought here.

I’m going to take a closer look at these two large rock platforms we saw from the top of the sanctuary. Here you can see also traces of human processing – stone troughs, gutters, apparently for ritual purposes. There is a stone corner, which in my opinion, is cut with tools, there is no way for nature to achieve such sharp edges, located perpendicular to each other. But still, I’m not an expert, so I can’t say anything for sure.

And the rounded platform, which I observed from the top of the sanctuary, has quite pronounced edges, which suggest the idea of ​​processing with tools. If we assume that this is a solar disk, then this would be the largest such one discovered in Bulgaria.

I planned to continue to the village of Dolna Koznitsa along the dirt road because according to the descriptions on the website skalnispomeni.com in this area are accumulated the largest number of anthropomorphic rocks. However, it is very muddy, the sun is starting to set and I decide it’s time to go back.

I managed to get here with the usage of the special modes for dirt roads, but honestly, I do not want to risk going further, because as one wise man said, “the more off-road capable your car, the farther the tractor will go to get it out of the mud”. So, this will be all for today.

On the way back I managed to capture some interesting panoramas, several abandoned houses in the village of Lilyach, as well as these beautiful trees against the setting sun.

How to reach the place 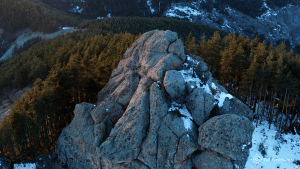 Hard to find megalithic sanctuary at the Greece-Bulgarian border 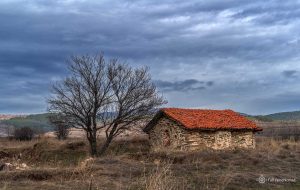 These medieval churches are not megalithic, but most of them are positioned near ancient megaliths 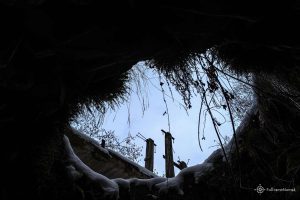 This megalithic well is the only one from the Nuraghic culture, found on the Balkan peninsula 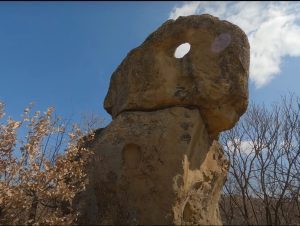 The megalithic complex Cherna Niva (Black Field) has not been studied till now and is very mysterious and full of artefacts. 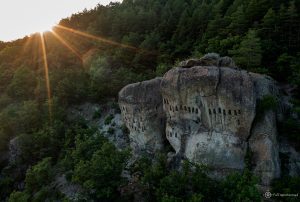 First ever detailed video footage from this ancient sacred place.