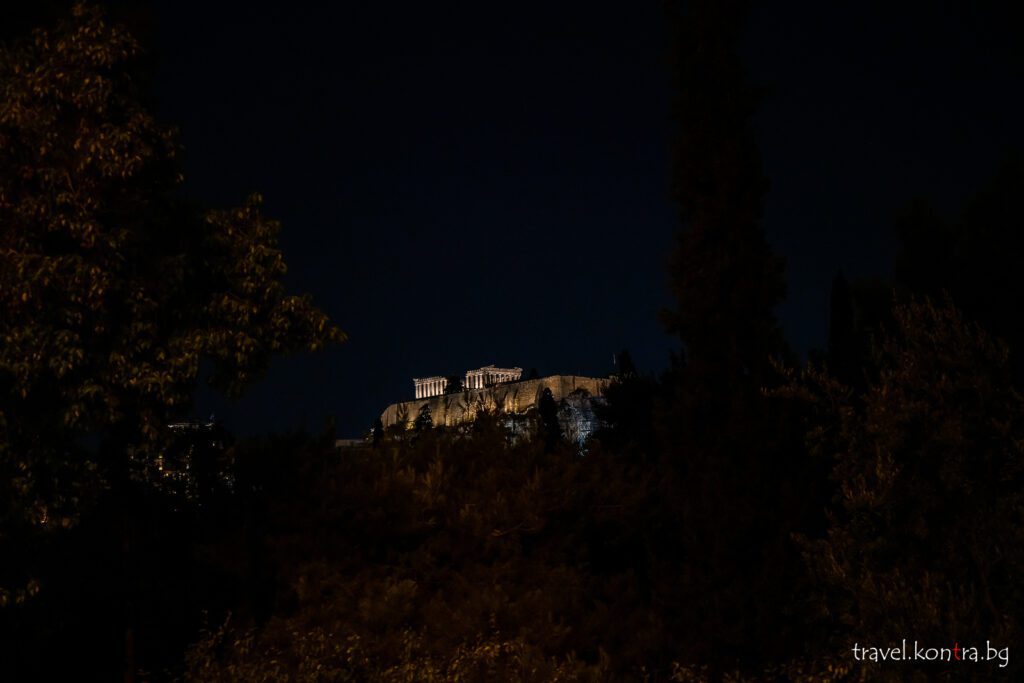 Day 2 - Volos-Lamia-Volos-Athens. I exchange a Landcruiser for a Fiat Panda, but better than a failed trip.

After a quick breakfast in the bakery opposite the hotel with the typical Greek pita (the local hybrid between a croissant and a pie, most often stuffed with yellow cheese or ham + yellow cheese) and double espresso (everywhere espresso in Greece is very good) we are ready for the trip to the capital.

We take our time and decide to stop by Pelasgia beach, which is conveniently located on a turnoff about 5 km from the highway (there is even a special exit for it). The road to the beach winds through beautiful olive groves, but it is quite narrow and behind a curve a huge truck jumps out at us. Who would expect a truck on the way to the beach! The driver waves his hands indignantly, and I wonder what the hell he is doing in this narrow road. Maybe he decided to go for a swim on his way to Athens, who knows?!

After we pass the truck, a huge black dog jumps out of nowhere and chases our car quite persistantly. We are lucky we’re not on foot or by bike, this monster could bite the hell out of us! This instantly reminds me of the popular Youtube video about a cyclist who rides on the dirt roads in Greece and enters among a pack of about 12 semi-wild shepherd dogs… In my opinion, when it comes to such wild destinations, it is best to travel by car! 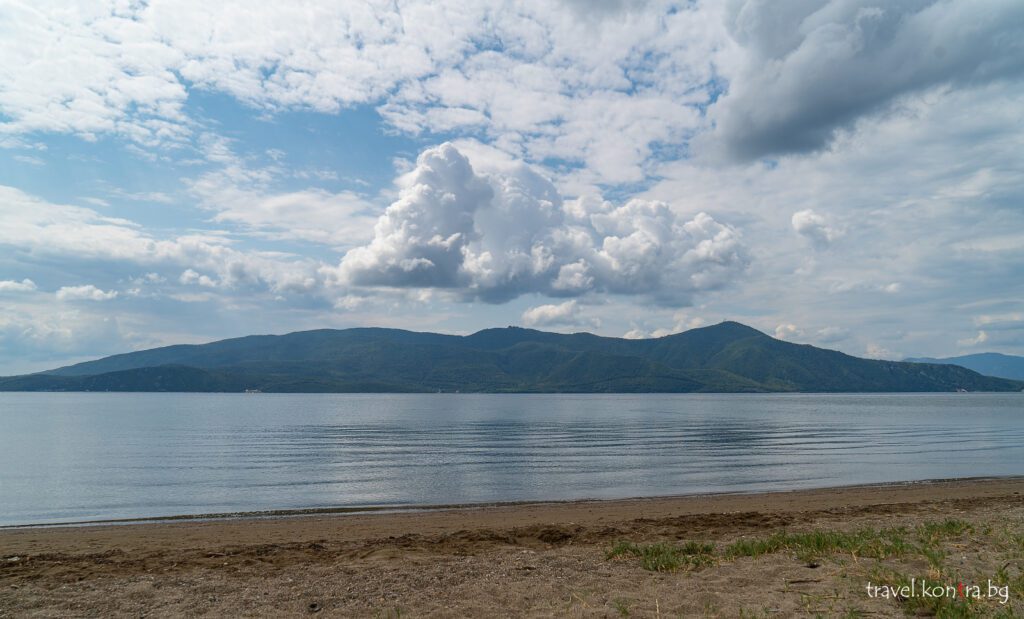 The beach is not super popular, nor is a heavenly place for swimming, but the view to the entire Malian Gulf is amazing. Unfortunately the moment we park on the desolate sand, out of nowhere appear 2 campers and a few more cars, filled with tourists, eager to enjoy the beach. The idylic mood is blown to pieces.

Having made our first beach visit and ready to continue to Athens, we joyfully return to the highway and there we face a HUGE problem with the Landcruiser, which I hoped to be my faithful vehicle throughout the trip on the dirt roads of the Peloponnese! Shifting from the first through to the third gear of the automatic transmission is fine, but after that the car starts revving and doesn’t shift normally to 4th and 5th gear. What now??!! I stop in the emergency lane. I turn the engine off, turn it on again, and then start driving, hoping it was temporary. The same thing! The engine roars terribly, and the speedometer barely reaches 90 km/h. We cannot tour the Peloponnese in such manner!

The town of Lamia is about 50 km from here, so I decide to drag the car there and see what can be done with the local repair shops. Luckily for me, there is a Toyota service shop at the entrance to the city, where they take our problem very seriously and inspect immediately, but unfortunately after checking the oil level in the gearbox and the distribution, the mechanics approach me with sad faces, shrugging and explaining that they do not have the necessary equipment to carry out the repairs. According to them the problem could turn out to be quite serious and will probably take at least 1-2 weeks to be repaired! Oh, the Horror! I call my mechanics in Bulgaria, but no one can give advice remotely, because the reason for the failure is not very clear. I face the following alternatives:

I lean more towards the second option (I really hate giving up on a clear goal and planning, already in motion), so I start looking for a rental car in Lamia. It’s early Friday afternoon, all available cars have already been rented, and there aren’t that many car rental offices in Lamia. I make several phone calls in Volos and after 4-5 refusals I am about to put up with option 1, when Herz confirms me they have a free car. Great! The Fiat Panda they offer me is not exactly the equivalent of Landcruiser, but it is better than the total fail of the trip. 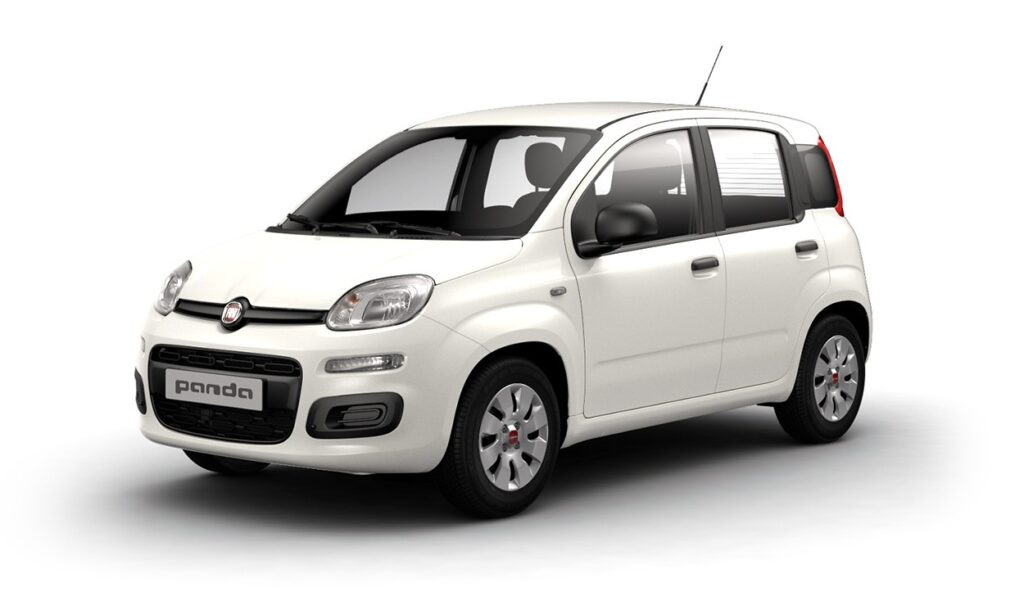 I jump on the lame horse and head back to Volos. This option is preferable, the failed jeep will be 100 km closer to the homeland. Since Herz is having a siesta from 14:00 to 17:00, we have to wait several hours in Volos to reopen the office. I find a public parking, which is free from 14:00 to 07:00 on the next day and I park there until I find a suitable paid and guarded parking lot to leave the car for 1 week. It’s bad everywhere! The average price is 80-90 EUR for 7 days. These guys are no jokers! I accept my fate since as I have not so many choices.

I make a few more conversations with auto experts from the homeland and it becomes clear that it is advisable to return home at a speed of about 70 km/h, so as not to exceed 3000 rpms. The back trip will take quite a while in this manner, but I’ll think about it when the time comes. (Thanks to KS for immediate feedback and invaluable advice)!

With Herz we clarify the conditions relatively quickly – rent-a-car companies and especially horror stories from the internet of stung tourists always succeed to convince me to take out full insurance, so even the cheapest version of a rental car regularly costs me around 100 EUR per day. I transfer luggage from the Landcruiser, park it safely and we set off for Athens.

I am passing The Volos-Lamia section for the third time today within the last 3-4 hours. I already know it by heart and the view of the Malian Gulf from the highway rather irritates me. I focus on the road and the management of the tiny white resemblance of a car (I will call it Tiny from now on), which I will ride for the next 2 000 km or so. In the next few days I will need to get used to the dynamics, the manual gears, the low chassis. The speedometer shows a maximum possible speed of 210 km/h. Are people from Fiat brainless??!! Who would drive such a little thing at 140 km/h, let alone 210 km/h.

A few things  I get convinced of while being on the roads of the Peloponnese, driving once again in my life a miniature rental car:

The trip to Athens is picturesque, almost all the time I drive along the northern and then the southern coast of the Malian Gulf. I probably missed a lot of photo opportunities, but due to the late hour I drive in twilight and later in the dark, so no photos are possible. In some places, the highway is under repair, but the sections are well marked with huge flashing lights, which you can see for kilometers, so it is impossible to crash into the construction equipment. And the repairs are in full swing at night. I don’t know if it’s because of deadlines, the terrible heat during the day or higher night rates, but it’s a fact that repairs are going full force.

We are approaching Athens and the traffic is becoming more intense, new lanes and new streams of cars are adding to the traffic from everywhere, there are constant detours here and there. The city is huge! Entering the city center is a total nightmare. It’s Friday night, almost 22:00 pm, and motorcyclists, cyclists and taxis are speeding past us from all directions. Why aren’t these people in the taverns already! Where are they going??!! Some streets are temporarily closed with police barricades. We have read in the news that there would be protests over the idea of compulsory COVID-19 vaccinations in Athens. We go deeper and deeper into the center and the streets become narrower narrower, and the motorcyclists more and more impudent.

I swear, I follow the constant updates of the GPS navigation, which re-calculates the route for every police blockade and I progress slowly towards the end point – Hotel Zappion, which turns out to bear the same name as the one of a very famous building in the city center.

The hotel informed us during the reservation process a few days ago that there is a parking lot nearby, with which Zappion work at a discount – by chance we find ourselves right in front of it as we sneak through the narrow streets full of parked cars and stop at the barrier with relief. I’m happy to leave the car here for two days and I plan to pick it up only when it’s time to get out of this hell of driving and head to the next point of our journey.

The night shift employee at the hotel is a super professional, with a well-balanced combination of courtesy, irony, self-irony, criticism of the government and everything else that goes into the golden formula for a good hotelier. We leave our luggage in the room and go on a night tour of the center of Athens. According to the receptionist, it is completely safe, no matter that it is almost 00:00.

We descend on Vasileos Konstantinou Blvd., past the brightly lit Kalimarmaro (the stadium Panathenaic – the only stadium in the world made entirely of white marble), and to our left on the hill the Parthenon lights up.

Then we head to the National Gardens. The frantic traffic continues even at this late hour, so crossing the boulevard should be performed only at the traffic lights!

We manage to see almost everything that has to be seen in this part of the center of Athens – the Stadium Panathenaic, the Zappion gallery, the columns of the Temple of Zeus, the Arch of Hadrian and of course the Parthenon in the distance, all of them nicely lit by floodlights.

Back to the hotel for well deserved rest, because tomorrow we are due for a veeery long walk.

Hadrian's Arch at night and the PArthenon in the distance 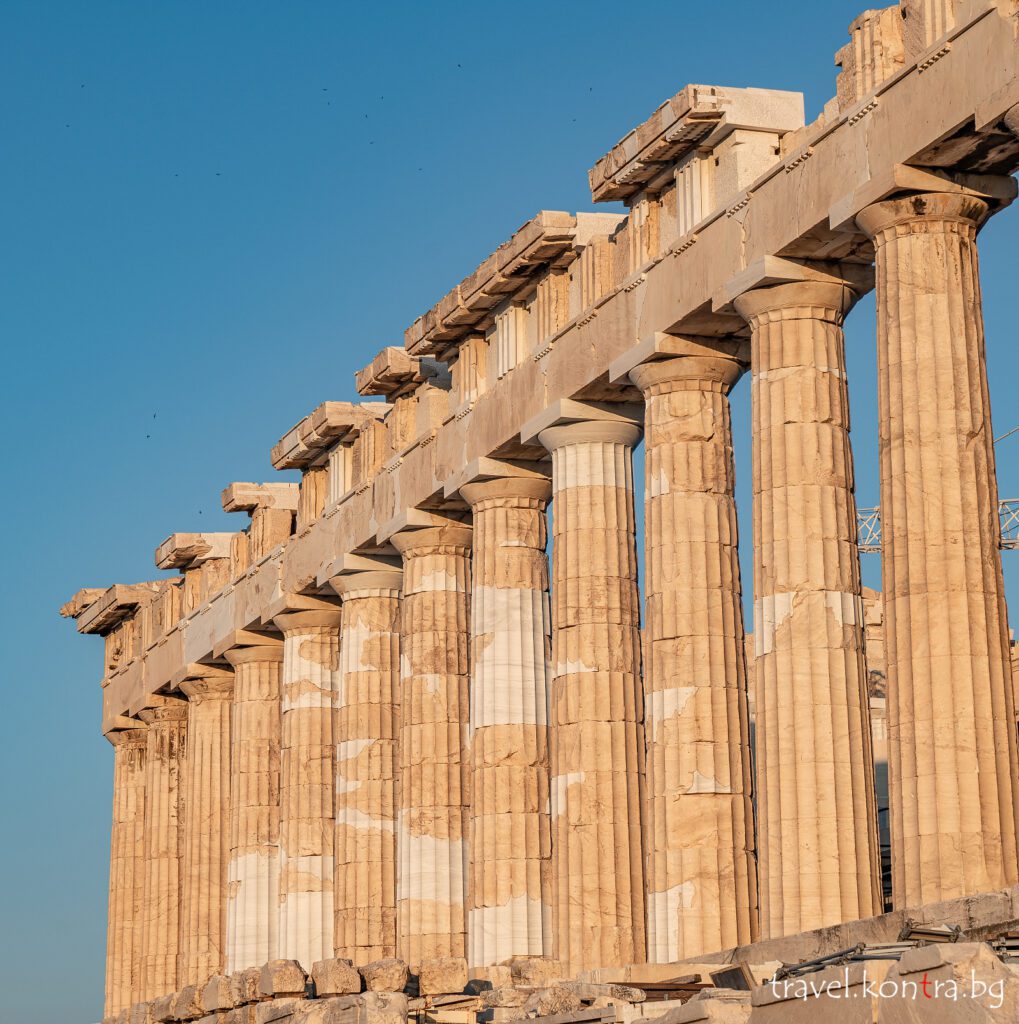 SEE ALL PHOTOS FROM ATHENS HERE 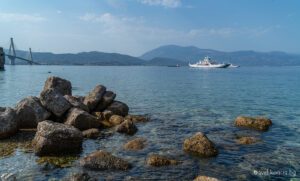 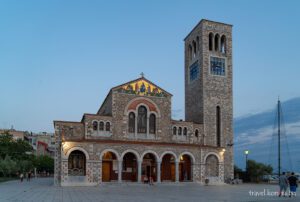 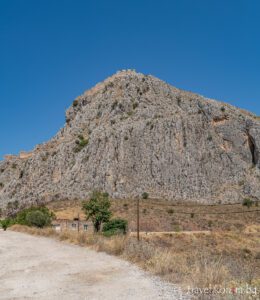 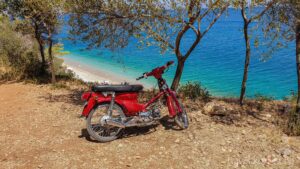 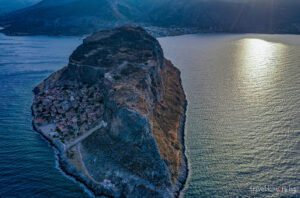 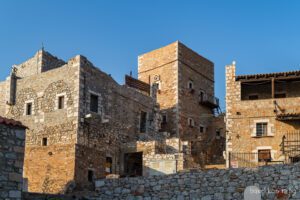 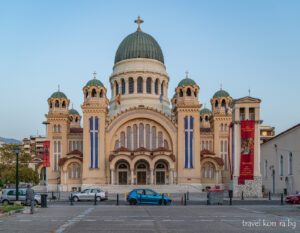 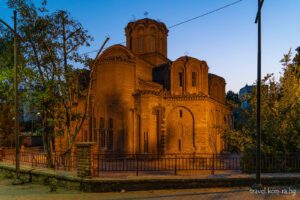 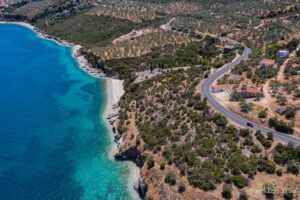